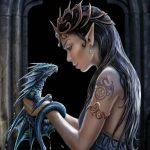 Often I like to zoom in on the colony buildings and look at stuff.  That's one of the more delightful parts of this game: the graphic detail is amazing! 😀  These were some of the things I thought were interesting:

- I took a closer look at the habitats and skyscrapers, and it turns out, each of the four corners of the buildings have little elevators and designated "protest spots."  I'd always assumed the protestors had to climb up there on their own and brought along cruddy little home-made projectors to protest with.  Might be something cultural they brought along from Old Earth, where every building had its own designated Protest zone (if you think canon-wise).

- Some of the trees in the tropical regions of Aven Prime have leaves that remind me of peacock tails.  Some of them have large leaves with "eyes" on them.

- If you look closely at the little "parks" around the habitats and skyscrapers, you can sometimes see little colonists in environmental suits, taking a stroll.  You can see something similar in the parks, but they wear regular clothes because the place is pressurized and heated.  Also, the type of trees the habitats and skyscrapers have in their park areas usually matches the environment outside, save for the polar regions.  For some reason the habitation buildings have desert trees in the little yard.

- If you look closer at the geothermal vents (before ever building an electrical plant on top) you can find dark brown, super-hot, bubbling water in it.  Reminds me of movies I've watched about Yellowstone National Park.

- I thought it was interesting, watching the solar panels tracking along with Aven Prime's sun.  Do real solar panels do that?  At least, the ones mounted on moving platforms?

- On the desert maps, when it's "wintertime," there's hardly any snow or frost at all.  Just a lot of dust kicking up into the air, thick mist everywhere, cloudy skies, and lightning.  I have no doubt the temperature drops a bunch during this time.  A common thing non-desert dwellers don't pick up on, is just how cold earth deserts can be at night, especially in the high desert.  Somehow, I get the feeling Aven Prime's deserts are similar, but due to the overall surface temperature of the planet, combined with the thinner atmosphere, it's probably cool all the time in the deserts.  The frost and snow are more noticeable in the tropical regions.  With the polar regions, the only way to tell it's "wintertime" is because the green spots disappear under the snow, and all the storms and darkness.

- I never noticed until recently that if you have a lot of farms clustered together, they're surprisingly noisy.  What's up with that?  It sounds as if there's a gigantic generator there!  I always thought farms and greenhouses were quieter than that, with only human, nature, and farm equipment sounds to break the silence.

These were the fun little details I picked up on in the game :).

Okay, just played the game again, and it isn't a pizza slice on the front of the Bar in Bistro Mode.  It's a deli sandwich cut in a wedge, my bad.  And all the buildings have 4 designated protest spots, not just the residential ones.  Forgot that part.

Oh yes, I forgot to add that if you're zoomed in close and look at recently built farms, you can see the crops growing up out of the fields or soil in the greenhouses almost immediately.

Also, now the geothermal vents have this greenish haze over the super-hot water, instead of the water being brown.  I took a closer look at the geothermal plants, and you can actually see around the yellow tank the construction bots built over the vent itself.